Koblenz and the train!

15 June 2014. Huge day today!
(Originally posted on Facebook that night over a beer and dinner with lots of potatoes)

Got up really early this morning to head off to Koblenz. I am on my own this week. I quickly ate some muesli, yoghurt and berries and didn’t even stop for coffee. It’s a good old German autobahn all the way and it doesn’t get any better sitting in the middle lane on 160kph listening to my playlist through the Avis Volvo’s excellent sound system.

I walked (hey … I call it walking) around the old town of Koblenz after squeezing into a very tight parking spot. I had to get my wheelchair out before I parked, then drag myself along the ground, back to the chair. Undignified but I didn’t get too dirty. The attached photo of the confluence of the two rivers (Rhine and Moselle) was a treat to be enjoyed from the cable car that I rode up, looked around, then came back down. Not much else happening here (it’s a Sunday) so I finally had my coffee and headed to Bonn (back towards Cologne). 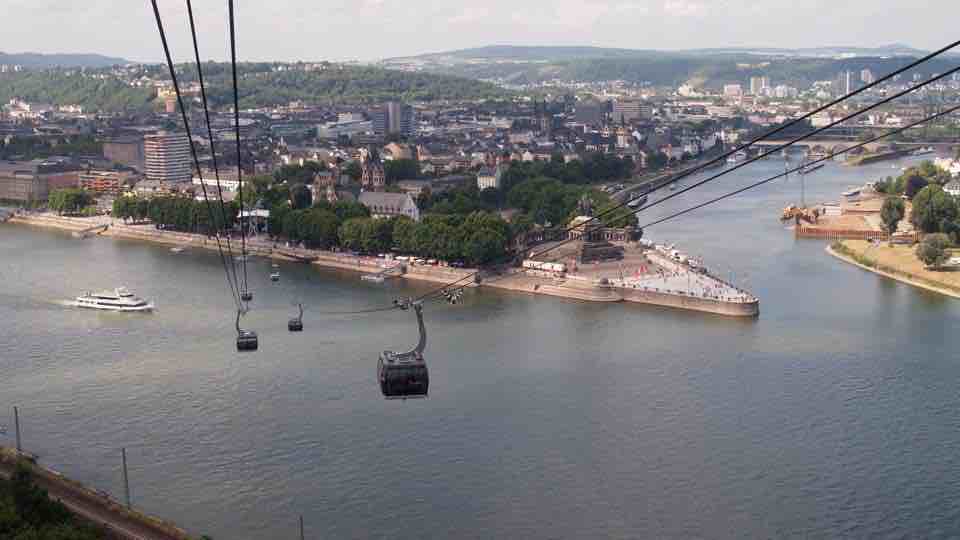 From here I needed to catch the train further upstream to Linz and ride the boat back down for what I was told would be the ‘best part’ of the river.

Well, that’s when the fun started.

Having parked the car next to where the boat would eventually return, I headed to the main railway station to board the train. 1km east of the river. I spoke to the info booth and asked about the train to Linz. They said it was a fast train that went via Frankfurt. Hmmm, Frankfurt really? Ok, I needed the bathroom so I chuffed off there. While away (she arranged for me to meet back in 5 minutes), I checked the train details on the page she printed. The train would arrive in Linz at 9.30pm (long after the last boat leaves). I quizzed her on this and she said that she was definitely correct.

Her colleague pointed out that she was about to send me directly to Linz in Austria (700kms away) not Linz in Germany (40kms away). Oh crap. That was close!

The correct Linz was apparently accessed by a different station 1km on the west side of the river. Hmmm.

Ok. Let’s go. Good old TomTom on my iPhone showed me the right way (never lets me down) and after half an hour’s brisk walk, I found the correct station. But which way? Left, or right? I figure that I was on the correct platform, so hearing an announcement I sensed a train looming and quickly bought the ticket from the ‘German only’ ticket machine. The train arrived and with no time to endorse the ticket I had to get on. Easy step up and I’m off. Love this German accessibility!

Thought I should check the sat nav again. Put in my destination and of course it doesn’t have ‘train travel’ as a mode so it’s mighty confused. We are not on any made road so the map keeps spinning around and around. Eventually, it said I was going the wrong way. Oh crap!

The next stop was just a few minutes away so I thought the ‘prudent thing’ to do was get off and go back. As the train pulled away, I realised the only way down was a big flight of stairs to the subway. Maybe I need to review my assessment of German accessibility? Oh crap!

Bumped my way down backwards to the subway level and to my relief, the stairs up the other side were accompanied by a lovely ramp. Phew! After 15 minutes the train in the new ‘correct’ direction came along. Alas. Two steps up. Without blinking an eye, I was out of my chair (again) up the steps and pulling the chair behind me. A little dirtier now. A gaggle of nuns on board didn’t know what to think. They didn’t get off their seats to help either.

Ok. Now I’m back on the right track so I feel better. Time is moving on and the last boat goes soon. I check the sat nav. At last it’s no longer confused. Now I really am heading the wrong way! Oh crap.

I quickly arrive back at the station I first started at. I get off. I look for the easy access off the middle platform but again, there are only stairs down to the lower level. No big deal, I have done this already. At the bottom, I look ahead through the tunnel and realise that the only way up is another big flight of stairs. No ramp. Oh crap.

Now I’m in trouble. Starting to wish I hadn’t been so adventurous. What was so good about the Rhine and those castles anyway? Perhaps I could have seen them somehow from the car. Too late … I’m here now!

Fortunately, there were a few stragglers also getting off the train (who might have noticed me going down backward for a whole two flights of stairs). As I got out of my chair to commence my awkward climb up, a kind English speaking lad offered to carry my chair up for me. Naturally I said yes. As he took off with my chair and my attached bag, including my passport, wallet, iPad, iPhone and my whole life, let alone my entire mobility, I realised I might have placed a little too much trust in this young guy. Oh crap.

I need not have worried. A somewhat dirty me emerged at the top of the stairs and climbed back into my awaiting chair. What must these locals think? Thankfully they could only see part of this stupid story! Now, I have 23 minutes to wait for the next train. I double check the direction. I check again. I check the time of the last boat. I check the time to destination. I have no way of knowing where the boat leaves from, relative to the destination station. And I will have 9 minutes to find it and get on board. If the train is on time. Oh crap.

The train eventually arrives. Again, two steps up but hey, I’m an expert at getting dirty. I had taken a screen shot of the train stops and counted them down. Yes, we were running late. Maybe 2 or 3 minutes. With an unknown path at the end. After half an hour, the train arrives at ‘Linz (Rhine)’ to give it it’s correct name. I get off, down 4 steps to the street (easy) and wonder what to do. I ask a local woman who then has a lengthy conversation with her mum. ‘It is very difficult’ she says. A long way (I figure it’s only one kilometer) through two underpasses and past some dead end. 7 minutes left. Oh crap.

Stuff that. I ignore her specific instructions and follow her general thrust and choose a more logical path. I figure that she was trying to give me an ‘easier’ path of travel. I am sure it’s the long way.  Hey, as everyone knows, I thrive on challenges and I love navigation! So, I follow my instinct, cross various roads and eventually hit water. This is good … boats float on water. I head along the river through awkward paths that wander around trees and obstacles and eventually emerge in a sea of people and boats.

Yes, this is the port! It’s not long before I find the ‘KD’ boat and an even bigger sea of people. I have two minutes left. I don’t have a ticket and the office is closed. I ask another official looking local if they sell tickets on board and he says ‘no’ and ‘not permissible to board without one’ (those crazy Germans!) so I’m stuck. Oh crap.

So near yet so far. This is the last boat and I have made it with two minutes spare. Yet to have it all come undone like this!

Bugger that. I’m getting on that boat! So as the gates open, rather than blending in with the crowd as the officials collect tickets, I go for ‘fuss’. Something I learned as a kid in a wheelchair. I queued at the wrong gate, professed to not understand instructions, insisted on that particular entry and ignored the attendant when he half-heartedly asked for a ticket!

As soon as I got on board, I hit the elevator to the top deck. Ahhh yes! Sunshine and tables. A light crowd, just enough to blend in. A bar! Even better. I bought the first of two lovely local beers. Then I sat back and enjoyed a fabulous 2-hour ride down the Rhine past the huge castles, delightful villages (some that I had already past three times on the train) and the old broken bridges from the war years. Fabulous and well worth the effort!

Another blast down the autobahn and I was back at my lovely hotel. A wander around on the final night here before I head off to meet up with everyone in Rouen in France tomorrow. 5 hours of hassle free driving in the Volvo.

So. Believe it or not, I had a great day! Just a tad tired. And that is what travel is all about!

« How did we get together? Networking in a Professional Services Firm »